Several members of a new class of anti-HIV-1 drugs, trying to prevent the viral entry into the cell, have arrived at the final stage of the drug development pipeline. An important subclass of these entry inhibitors are drugs that target one of the receptors that can be used, in addition to the main receptor CD4, by HIV-1, as a coreceptor to enter the cell. The most important HIV coreceptors are the chemokine receptors CCR5 and CXCR4. HIV-1 particles fall into three classes according to which of them they can use to enter a cell: some can only use CCR5, others can only use CXCR4, and some can use either of them. Before and during drug treatment with a coreceptor antagonist it is important to find out about the coreceptor usage of the virus population in the patient. Currently, expensive and time-consuming experimental assays are used for this task. In contrast, bioinformatics methods for predicting coreceptor usage directly from the sequence are cheap and fast, because sequencing has become a routine task in biotechnology. geno2pheno[coreceptor] is such a bioinformatics tool, currently based on support vector machines: it predicts HIV-1 coreceptor usage from the V3 region of the HIV envelope protein gp120. It is very easy to use: you do not have to cut the V3 loop out of your sequences and you also don't have to align your sequence manually -  geno2pheno[coreceptor] does all this automatically. The tool consists of two screens: when visiting the geno2pheno[coreceptor] web site, the input page is shown. Here you can paste in or upload your sequence, and adjust some options. On clicking the "align & predict" button, the output page will be displayed. This may take some seconds due to the computations that have to be performed.

3. What do the significance levels mean?

As mentioned above, the significance levels let you adjust how conservative the prediction of CXCR4 usage will be. How to interpret it exactly is not difficult to understand and will be explained in this section.

Consider the picture above. Here, we have plotted a histogram of the scores for the tendency of the virus to be X4-capable (can use CXCR4) that were predicted by our (old) method for sequences with known coreceptor usage. The plot was computed for the task of detecting whether a virus is X4-capable. Thus the intention is that high scores indicate a high tendency of the virus to be X4-capable and low scores indicate a tendency of the virus not to be X4-capable. In the plot, the x axis represents the predicted scores, and the y axis shows the number of samples which were assigned a particular score by the method. The blue bars represent the histogram of predicted values for the sequences that are not X4-capable, and the red bars show the histogram of predicted values for those sequences that are X4-capable. Since the situation which is shown here is about detecting X4-capability, those sequences that areX4-capable (shown in red) are called "positive" samples and those that are not are called "negative" samples. The tendency that the positive samples attain a higher score than the negative samples is clearly visible from the plot above. However, you can also see that there is significant overlap between the two distributions for the positive and negative samples, pespectively, so perfect classification is not possible. This leaves us with the problem of how to choose an appropriate cutoff for prediction, such that all samples that are assigned a score greater than the cutoff will be predicted as X4-capable and for all samples that are scored below the cutoff, the prediction will be that the virus is not X4-capable. To understand the trade-off that arises, have a look at the following picture, which is the same as above, but with three different possible cutoffs shown. 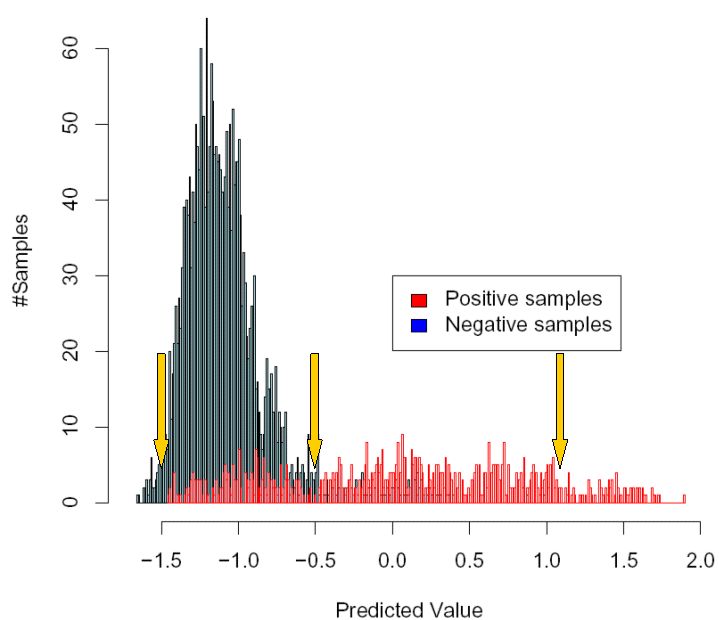 As a start, imagine that you select the leftmost of the three cutoffs that are shown, at the value -1.5. This means that if a sample is scored below -1.5, the virus is predicted as not X4-capable, and if it is scored above -1.5, the prediction is that the virus is X4-capable. As you can see from the picture, with this choice of cutoff, you will detect virtually all X4-capable samples (in red), but you will also get many "false alarms", since most of the X4-incapable samples score above this cutoff as well.
In contrast, if you now assume that you have chosen the rightmost of the three cutoffs (at 1.1), you will almost never predict by mistake that a sample is X4-capable, if in fact it is X4-incapable, because almost all X4-incapable samples are scored below 1.1. However, the drawback of this cutoff is that a lot of X4-capable sequences will remain undetected, because they are scored below 1.1 as well.
A suitable choice of cutoff will likely be somewhere in between these two extremes, for example such as the cutoff shown in the middle in the picture (at -0.5). Still, it is important to realize that there is no "best" cutoff, since its choice depends on your particular interest. If you want to get very few false alarms and you can accept to miss some X4-capable sequences instead, you might want to choose a cutoff that is higher than if your interest is more to detect as many X4-capable sequences as reasonably possible.

Quantifying the conservativeness of the prediction: the significance levels

By now you should know that a higher cutoff corresponds to a more conservative prediction, because the classifier is more careful to predict X4-capability, with the result that only few predictions of CXCR4 usage will correspond to X4-incapable samples . geno2pheno[coreceptor] provides you with a quantitative basis for choosing a cutoff, in the form of the significance levels, shown in the picture below:

The problem with which we are dealing here is called binary pattern classification (binary, because it is just about deciding whether the output should be "yes / positive / 1" or "no / negative / -1"). In binary classification, there can be four different outcomes of a prediction, depending on the true class of a sample, and the predicted class. These outcomes are summarized in the table below:

The numbers which are shown in the select box, indicate, how often these different events happen:

The trade-off between detecting many positive samples and predicting few negative samples as positive is immediate from the values shown in the select boxes.
For example, the preselected value that is shown for detection of CXCR4 usage means that 10% of all samples that are X4-incapable will be predicted as X4-capable by our classifier. If you want to be more sure that a virus is really a X4-capable virus, you can make another selection in the box and choose a false positive rate of 5%, for example. However, this comes with the drawback that more X4-capable viruses, capable of using CXCR4, will be missed and falsely predicted as X4-incapable. As we have seen above, "behind the scenes" this is simply lowering the cutoff.

When you have selected the "align & predict" option and started the prediction-run, after a few seconds, the output screen will appear. In this section, we will explain how to interpret the data shown on this screen. The output page has four parts:

geno2pheno[coreceptor] is based on a statistical learning method called a support vector machine (SVM). We used the libsvm tool provided by Chih-Jen Lin. Since SVMs are a two-class classification method while the coreceptor problem has three classes (R5,X4,R5X4) and since it is only important if the virus can use CXCR4 or not, we have only trained models for the detection of X4-capability, in which X4 and R5X4 viruses are taken as the positive class. The choice of SVMs is justified by a comprehensive evaluation of different approaches to HIV coreceptor prediction. In this evaluation, SVMs outperformed all other methods (including the classical charge rule, decision trees, neural networks, position-specific scoring matrices, and mixtures of localized rules). The figure below summarizes the results of our experiments in detecting CXCR4 usage. In this so-called ROC (receiver operating characteristic) plot for each method, for all possible cutoffs (recall the discussion above), the false positive rate is plotted on the x-axis, and the true positive rate on the y-axis. It can be clearly seen that the SVM (we experimented with different input representations and kernel types) outperforms the other methods, especially in regions with a low false positive rate, which are the regions of practical interest. The evaluation is based on publically available data (mainly from the HIV sequence database in Los Alamos, but we also took some sequences from publications that have not been included in the Los Alamos database so far). All in all, we had 1100 V3 sequences (769 R5, 210 X4, 131 R5X4) from 332 patients. In each training-test-run during the cross-validation procedure, only at most positive and one negative sequence were incorporated for each patient, thereby avoiding epidemiological bias as much as possible. More detail can be found in the relevant publications.